Jessica: From Invisible to Best Friend 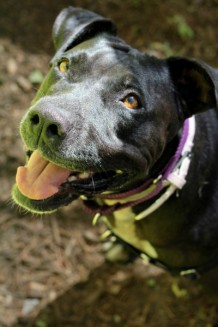 Jessica was everything a dog owner could want. She loved with her whole soul, smiled sweetly at passersby and presented a playful, silly spirit. But month after month -- nine long months, to be exact -- Jessica waited silently among the chaos, unnoticed.

As time crept by APA! staff grew more concerned for this passive, patient girl so featured her in blog posts and Facebook, hoping others would see her.  She was already seven years old and more than ready to start her life with a loving family.

But Jessica was at a disadvantage. She was surrounded by younger, smaller and outgoing dogs who effortlessly drew attention to themselves while she blended tolerantly into the background. Jessica also had heartworms -- something that many potential adopters probably didn’t realize was treatable.

She kept her head up, however, and wiggled with delight when she could pick out a new companion from the squeaky toy mountain. She passed her joy and love to all the staff and volunteers at the shelter and didn’t hold any grudges when families overlooked her.

What Jessica didn’t know was that somewhere out there, someone else did see her.

Russell had been following Jessica’s story for almost a month but was waiting for approval from his apartment complex before he could get his hopes up. 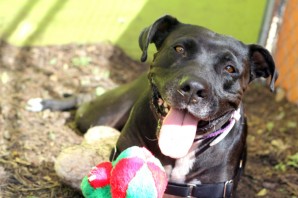 He started to visit her after work and on weekends and Jessica seemed to glow with recognition when she saw him.

"It was so funny because when the other dogs would be barking, she was just so calm and relaxed," Russell said. "I knew that she would be perfect for me with such a laid back demeanor."

Once Russell got the OK from his landlord, he snatched her up. APA! staff and volunteers were over the moon. Jessica was going home!

But Jessica wasn't so sure.

"At first she thought it was a temporary home," Russell said. "Every time I would take her back into the apartment, she would look so sad. After months of people visiting her at the shelter and then leaving her behind, I don't think she believed I would stay."

It took some time but Jessica has relaxed and learned to trust that she's finally found her place. She adores sunny days when she can sprawl onto the grass or sit with Russell and his girlfriend, watching the world go by.

"She loves strangers and waits for all the neighbors to pet her."

Jessica's other favorite new pastime is jogging with Russell, which he said was tough when she was being treated for heartworm.

"The first night after her heartworm treatment she was so weak but still wanted to go out for our run together," Russell said. "She looked at me like 'hey, why aren’t we running?'"

"I cannot urge people enough to use heartworm preventative medicine for their animals," he said. "Thanks to APA!, Jessica was lucky hers was caught in time, and the cost of treatment was covered in the adoption."

And thanks to Russell, Jessica has been given the greatest gift of all: she is no longer invisible.

"Jessica is a friend, a family member and the protector of my home," Russell said. "And soon she will be all that and more for my new baby, on the way next month!"

The happiest of all endings; we couldn't be more pleased for Jessica and her new family and extend our gratitude to another one of our heroes.

There are many more dogs like Jessica -- Louise, Patricia and Glory -- who have been waiting patiently at the shelter for their chance. Contact APA! to find out how you can meet them.