Summer is the most difficult time to remain a no-kill community because of kitten season. Kitten season is when cats, primarily feral cats, breed. Kittens come pouring into the shelter from March through September, usually brought in by well-meaning citizens who find them in their yards and think that taking them into a shelter immediately is the best thing for them.

There is a direct link between outside cats breeding and the weather.  Last year, when we were in record drought and heat, we had the lowest intake of kittens to our city shelter in history. This year, the temperatures are a little more moderate, so we're seeing more (although it's looking to be the 2nd lowest in history).

Keeping up with the increase has been tough. We have this guide to help people when they find kittens and hope that some good samaritans will raise the kittens and find homes for them (while trapping, neutering, and returning the mama cat to her outside territory) or at least wait to take them to a shelter until they are weaned.

Feral cats have either had very little or no contact whatsoever with people which leaves them mistrustful and fearful around us, so much so that they will never be able to be socialized.  The older a kitten gets without socialization, the more difficult the kitten will be to tame. Our goal as a community is to catch and socialize kittens under 12 weeks old, while doing TNR (trapping, neutering, and returning) on the older cats so they can no longer breed, with the hope of gradually, but significantly reducing the feral cat population. 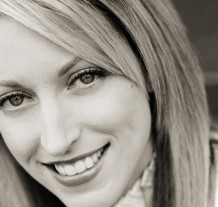 Carrie Crowe, a volunteer baby kitten bottle feeder at APA!, knew there were feral cats in the streets around her home but wasn’t sure how she could help. One day this summer, she and her husband were thrown headlong into the wonderful, crazy world of TNR and kitten rescue and socialization when they saw kittens, the offspring of a feral mama cat, playing in their neighbor’s yard.  Carrie knew that time was of the essence if she wanted to capture and socialize these kittens. What happened next is the story of how one woman went from feral cat “newb” to cat trapping/rescue expert in the space of a few weeks with the help of the internet and the advice of friends active in the animal welfare community.

APA!: So, Carrie, how did you come across the kittens you ended up rescuing?

Carrie: Well, my husband was leaving early in the morning to go to the gym when he saw them playing in our neighbor’s yard. He tried to approach them but they ran into a gap in the neighbor’s porch. He alerted me to their presence and I knew right then that I absolutely had to help them. I wasn’t really sure how old they were at first, but after looking online for information, I guessed they were around seven to nine weeks old. And they were absolutely adorable! One grey/white tuxedo, one black/white tuxedo and three solid black kittens.

APA!: Was it easy to capture/rescue the kittens?

Carrie: At first it was pretty hard. I didn’t really know how to go about it. I tried putting food and water out on the porch, and I approached them while wearing thick gloves, with the intention of just grabbing them and putting them in a carrier, but this didn’t work out too well for me! The kittens were far too speedy! I then decided to rent some cat traps from the Austin Humane Society (they rent them for FREE with a credit card on file). They even showed me how to set the traps and suggested tuna and baby food for the bait.

APA!: How did things go once you set up the traps?

Carrie: The day after I got the traps, I spotted the mama kitty walking all of her kittens around the front porch and into the gap. With the help of my husband, the trapping began. I'd set the traps around sunset and we'd both check them before we went to bed and then first thing in the morning. I’s always best to trap at night because it's cooler and the cats are more active.

You do need to have a lot of patience when trapping feral cats as it doesn’t always go as fast or as smoothly as you would like. It took a night or two before I caught my first cat, an adult black and white tuxedo - probably the dad!

Since I caught the dad on a Friday night, I took him to Emancipet, since they do feral spay/neuter M-Sat mornings, to get neutered. The Austin Humane Society only does feral spay/neuter on Wednesday and Thursday mornings. As it turns out, the dad was too feral to socialize, so I had him neutered, kept him in the cage overnight on my front porch and then released him the next morning in the same place that I caught him. It’s important to keep cats overnight in the trap after the surgery until the anesthesia wears off. It can make them hallucinate, so they could get hit by a car or become easy prey if they don't have their wits about them.

A couple of days after trapping the dad, I caught the mama cat, and spayed her the very next morning. As she was also too feral to be adopted into a “forever home”, I kept her overnight in the trap after the surgery and released her back to the area where I’d caught her the following morning. Remember, it’s not cruel to release spayed and neutered feral cats back onto the streets. Since they can’t be socialized, it’s much more humane to return them to the neighborhood they came from, so they can live out a happy and healthier life now that they are neutered. Plus, they can no longer reproduce, so they won’t be contributing to the increasing number of feral kittens in Austin.

APA!: And what about the kittens? Did you manage to trap them?

Carrie: The kittens were actually much harder to trap than their parents. However, after a few days, I finally managed to capture the grey/white tuxedo kitten, which was socialized, fixed and adopted into her forever home! (See “Tips” below for Socializing!) After this, I was sure I’d manage to trap the other kittens quickly, but the mama cat was savvy, and moved the remaining kittens to a new hiding place, and I had no idea where they were. Despite this, I continued trapping but instead of capturing kittens, I managed to trap what seemed like every possum and raccoon in the neighborhood! This is, unfortunately, a common hazard when trapping cats! 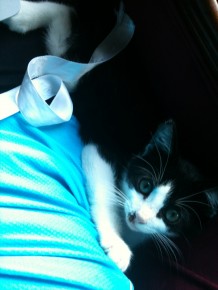 Eventually some local residents living in a nearby apartment complex informed me that they had seen the mama cat and her kittens going in and out of a hole which led to a large, open space underneath the complex. That night, I put a trap in front of that hole and, sure enough, one of the black/white kittens went right into it! That was, unfortunately, the last kitten I was able to trap from that litter but I haven’t given up, and I’m hopeful I can trap and TNR the other three if they are too feral to socialize.

APA!: How did you manage to socialize the two kittens you trapped, and what happened to them afterwards?

Carrie: Well, the kittens were scared at first but they soon warmed up to me when they realized that I was a source of tasty food! I made a point of holding and petting them while they were getting fed because that way they associated good things with me, or humans in general.

It’s really not that hard to socialize kittens when they’re still young enough (usually between six to ten or 12 weeks) although it can sometimes depend on how feral their mother was, as they learn from her. The key to socialization is just being patient and persistent! I knew that I’d won these kittens over as soon as they started to purr and play! 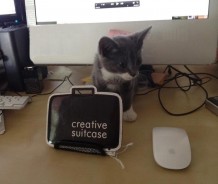 As for what happened to the kittens, I found a home for the first kitten I caught (the grey and white one) through a friend. She is now named Gracy, and I’m told that she’s a kitten princess!

My mother helped me find a home for the black and white kitten in Dallas, now named Sylvster, and he’s also thriving there with his new brother Sherman.

APA!: Do you have any tips for cat lovers who are new to the whole TNR process, and rehoming kittens?

Carrie: My first piece of advice would be to make use of all the phenomenal information available on the websites of Austin’s many animal welfare organizations. I learned so much by browsing the Austin Humane Society’s website which has specific information on feral cat trapping.

It’s also very important to rely on friends and family for support and advice. I would never have found homes for the two kittens I trapped if it hadn’t been for my friend and my mother. My husband was also great at boosting my morale on those nights when only raccoons and possums ended up in my traps! Finally, I was fortunate enough to have a supportive neighbor who let me have exclusive use of his spare room where I kept the kittens, while socializing, and could come and go as I pleased.

The hardest part of the process for me was finding good homes for the kittens. As I said before, my friends and family were invaluable here, but don’t forget about social media, as Facebook and Twitter can be great for spreading the word. Just make sure they are adopted into a caring “indoor only” home.

Please don’t turn the other way when you find feral kittens in your neighborhood. I know that it can be very overwhelming when you don’t know what to do, but just think about all the many cat and kitten lives you will be saving!