Thank you to March's Volunteer of the Month, Diane Stapley. Diane has been generously volunteering at APA! for years, she has been invaluable to APA! in so many areas! 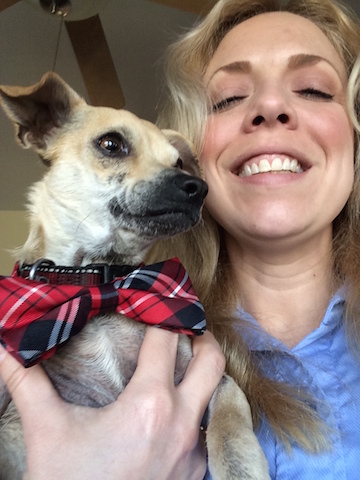 This is what her peers have to say about her:

Diane continues to foster special needs cases and did so again over the holiday. She is a constant participant with the tech needs at APA!, is always active on the development committee and was lead for the Staff volunteer party in December. She portrays APA! in a professional way and is a consistent resource and has proven herself to be very dedicated to our mission. —Denice, Development Committee

Diane is incredible. She is a data champion and so quick to respond any moment I need ANYTHING at all... Including Christmas Eve. She keeps everyone in check on the development committee, sends our reports to Best Friends which keeps money coming in for hugely valuable programs and is pretty much my go to lady for everything statistics. She is a pleasure to work with and I deeply appreciate everything she does for APA!. Oh and I can't forget... On top of a full time job of her own, being a rock star in development and being our main go to for pet point and all data in general, she is a medical foster, which is a tough and incredibly important gig. I couldn't do my job without her. —Rebecca, Marketing Manager

Diane is a loving foster who never hesitates to open her heart and home to medical cases, bottle babies, and special needs pups. She helps behind the scenes as the Pet Point Administrator and helps with marketing efforts despite her incredibly busy professional and personal schedules. Diane is always willing to help her fellow volunteers with suggestions, ideas, support, and knowledge. Diane is an incredible asset to APA! and she deserves to be recognized for all she does for us! —Claudia, Dog Foster Events Coordinator

Diane is a foster and she troubleshoots ALL the PetPoint issues and questions for the entire organization. She has also spent time and a lot of energy ensuring Azura was comfortable at the shelter and finding her a foster. —Jess, Dog Walking Team Lead


And here’s what she said when we got to know her a little better:


How did you get interested in volunteering at APA!?
As Christmas 2011 approached, I heard that APA! had a campaign of "home for the holidays." I filled out a foster application and went through screening. The dogs who were a match for me for Christmas break kept getting fostered, so my husband and I wound up going on Faith's instruction to TLAC (overflow for APA!'s Manchaca HQ, at the time) and brought home an adorable terrier named Ernie. He had a great Christmas, complete with a stocking and treats. I broke down crying the night before we were to bring him back to APA!, and then I knew I was hooked!! Ernie was adopted within days, and shortly thereafter I trained to volunteer in the neonatal nursery, as well as began transporting all types of animals for APA!. I shift led on Friday and Saturday nights, helped to organize the volunteer calendar and parties, and wound up foster failing with a beautiful tortoiseshell bottle baby girl. Every step I've taken and every new program I've learned since has pulled me deeper into dedicating 100% of my volunteer hours to APA.

What are you most passionate about at APA!?
I absolutely LOVE engaging people at APA!. Every interaction we have is an opportunity for a Forever Home for one of our animals---whether the visitor is there to adopt, to volunteer, to foster, or to drop off donations, they in some way have an impact that will save two lives: the life of an APA! adoptee, and the life of an animal we can then pull from another shelter since space opened up with us. There's a wonderful meme on Facebook which shows a long row of kennels in a shelter; every kennel door is standing open and every kennel is empty. The caption is "I have a dream." I have this dream too, and I remember when TLAC was the most miserable City-run shelter site I'd seen in all of America. My passion is to see APA! make the dream happen in Austin while being a role model for the rest of the United States and even the world.

What is your favorite thing to do at APA!?
I've had an incredible time experiencing so many ways to volunteer at APA!: I've fostered bottle kittens, bottle puppies, older kits and pups, and small dogs. I've transported litters and HUGE pit bulls in my super-charged Mustang (and arrived in record time to spring animals from AAC!). I've walked large breed dogs and been BOO trained, and I've helped with computer/IT issues and enhanced my medical skills to help my fosters. I've administered our Development Committee and planned fundraisers large and small, even hosting some of our biggest for individual programs and for APA! overall. I've been our PetPoint database admin for years now, and even coach other shelters how to get started with a database while generating charts monthly for the Board and on-demand for Dr. Ellen Jefferson and her staff when they need to make a data presentation about our life-saving programs. But my FAVORITE thing to do at APA! is to connect potential adopters with my fosters. I provide the adopter a complete write-up on what the animal likes/dislikes, daily food/sleep/potty habits, and anything else that will enable a successful transition to my fosters' Forever Homes. I have a 100% success rate of getting my foster puppies adopted at the Tarrytown adoption center, and a greater than 60% rate of ongoing contact from my fosters' adoptive parents---it's heartwarming to see "my" babies grow up!

What are some words of wisdom for new APA! volunteers?
JUMP IN! We have SO many needs that we will surely find a way to use your skills. I had no idea that my computer skills would come in handy at an animal shelter back when I took a foster dog home in 2011, and today I chart and process records for just under 10,000 animals every year. If you think of something you'd like to help with, ask around---odds are that we have a team with whom you can be connected and who are simply craving your help!

Do you have a favorite cat or dog at APA!?
I have a bias, my two absolute favorites are my foster fails: Telene, my bottle kitten who survived pan leukopenia in 2012, and Filbert, my Chihuahua who came to APA! with seizures and mange so severe his skin was painful in 2014. But in APA!'s current set of available animals, Winnie, a special Manx kitty in foster care, and Loverboy, a winky big Rhodesian Ridgeback mix at TLAC, have special places in my heart. I've watched Winnie grow from a bottle kitten to a beautiful sweetie who lives with a dear friend of mine, Mary Jonse. Winnie's so lovable! And I got to know Loverboy when he was in isolation next to a BOO dog, Azura, with whom I was working daily. I always saved a treat for Loverboy, when he could have them, and he was the biggest wigglebutt when he heard a friendly voice! I pray they are both in Forever Homes very soon, and hope that people will share their bios!

What's an interesting fact about you people may not know?
I was born in New Hampshire, came of age in New Orleans, moved to Silicon Valley for work, and then to Austin for work. At every step, I've had a least one pet---and usually tended to the feral communities in my area! As a child in NH, my mother had to make me stop feeding the feral colony; in New Orleans, I not only fed the neighborhood colony but adopted a first-time momcat from it. She was a sassy tuxedo girl who I named "la Chance", French for "Lucky", and she traveled the country with me---even staying in hotels for weeks at a time. For years it was just the two of us but she always made me feel like the luckiest Maman (Creole/French for Mom) in the world. She went to the Rainbow Bridge at age 11 and I still remember her in my prayers: 'a bientot, petite, Maman t'aime.