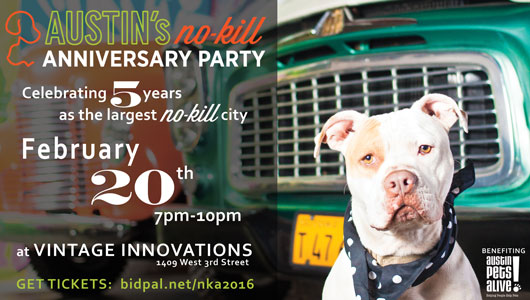 This year’s anniversary party, presented by Vintage Innovations, will take place at their facility, at 1409 W. 3rd St., from 7-10 p.m. The evening will include musical talent from the nation’s two biggest music cities: Austin and Nashville, with performances from Amy Nelson’s own Folk Uke, The Texas KGB, Blue Steel, Dan Dyer, and other surprise guests.

“We are ecstatic to be celebrating Austin’s fifth year as the largest No Kill City in the country.” stated Elizabeth Free, Corporate Relations Manager at Austin Pets Alive!. “An event like this could not be possible without sponsorship support and we feel privileged to have Vintage Innovations, UBS, Tito’s Handmade Vodka, Austin Subaru, HostGator, and the many others in the business community participating in this year’s anniversary party. Their support enables us to continuing saving the lives of companion animals most at risk for euthanasia.”

The evening will be hosted by KXAN’s Jim Spencer along with his rescue dog Kaxan. Attendees will enjoy local food trucks, complimentary beverages, On the Flipside’s photo booth, a chance to win rare raffle packages and an Airstream trailer for a VIP reception.