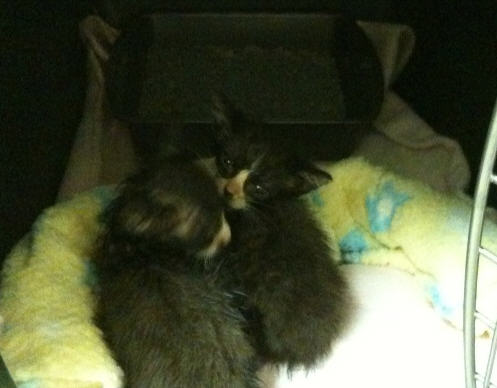 I'd like to introduce you to two kittens from our 4th A litter in the Bottle Baby program at APA!: Arizona & Alabama. These two tuxedo girls came in as Owner Surrender kittens with their littermates: Albuquerque, Adelaide, and Andes. Arizona was immediately described as the "runt," while Alabama has a moustache & goatee and was the 2nd smallest kitten in the litter.

The kittens all varied greatly in weight from one another upon arrival to the shelter, and is often the case in the absence of their momma cat, Arizona & Alabama were struggling to figure out how to eat on their own. Developmentally, these kittens were estimated to be 3-4 weeks in age. Their eyes wide open, ears standing up, walking upright, etc. However, if these two girls had been isolated from their littermates upon intake at the shelter, no doubt they would have been estimated to be younger just based on body weight. There is no competing for food when you weigh a mere 240 grams and your brother weighs a whopping 520 grams. By the time these girls finally realized they needed to belly up to the plate of food, it was mostly gone.

In just a few short days, Arizona had lost a significant amount of weight and was down to only 208 grams and completely emaciated, just skin & bones. Alabama wasn't far behind in the decline. This drastic and rapid weightloss is frightening, especially in such a tiny kitten, and requires urgent attention. During a volunteer feeding session at the Bottle Baby trailer, one of our feeders realized that these two kittens  needed to be isolated and fed more often than is typical for a 3-4 week old kitten. In fact, Arizona was so weak that she was barely able to stand on her own, much less attempt to show any interest in eating. 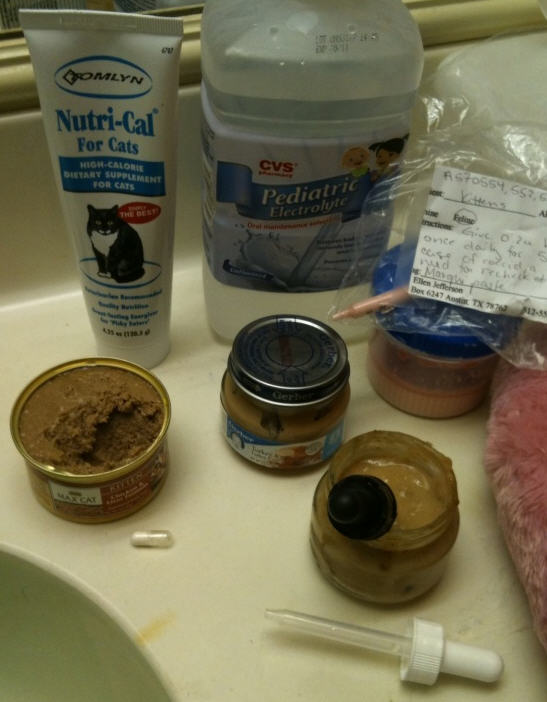 So, these kittens went home with a feeder/approved foster outfitted with an arsenal of supplies to get these girls back on track. Supplies included: kitten food, human baby food (chicken or turkey), Pedialyte, Nutrical (a high-calorie food supplement for cats), a 1 ml medicine dropper, heating pad, digital scale, blankets, and a secure carrier. The kittens had also been started on Amoxicillin, so to counteract the digestive affects of this, probiotic powder for pets was also used (plain yogurt can also be used). A "cocktail" of kitten food, baby food, Pedialyte, Nutrical and probiotic was prepared and the kittens are now being force-fed every 90 minutes using the medicine dropper and oral syringes. 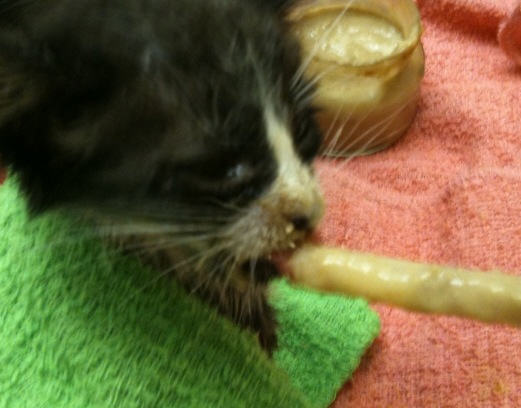 The girls willingly accept being carefully wrapped in a dry washcloth to contain their claws, and let the foster hold them close to her chest while she repeatedly administers 1 ml  "doses" of this potent mixture of nutrients. After documenting how much they eat, and weighing each kitten, their faces are carefully wiped off with a warm baby wipe and kittens gently placed back in their carrier. Blankets are warmed with a heating pad and a miniature litterbox is nearby. The girls cuddle up and sleep, until the next feeding and the entire process is repeated.

The majority of kittens (or adult cats/puppies/dogs, for that matter) in our care do not require this level of attention. And a lot of people may not understand why so much effort is put into animals that might be sick or failing to thrive. Well, the answer is simple: Austin Pets Alive! is a No Kill Organization which means that if any animal we have rescued from the shelter (that were facing certain death) becomes ill while in our care, we will treat it.

We will keep you posted on the progress of Arizona & Alabama. If you would like to support efforts that APA! makes, through volunteers & medical staff, to help kittens and other animals that require force-feeding, please make a donation. You can also donate supplies such as Nutrical (pet stores), baby food (chicken/turkey ONLY), medicine droppers (CVS/Walgreen's), digital scales, heating pads (non-shut off, CVS brand), and Pedialyte. Donation drop off is at the Bottle Baby Trailer at the corner of S. Congress & Gibson.

You can also foster or volunteer to help care for all our precious babies.