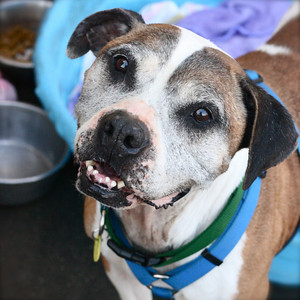 For whatever reason, the description of Nigel as a "fine dog" makes me giggle every time I think of it.  Maybe it's because one of the other volunteers described him as such when he was wearing an "Adopt Me!" vest up around his head like an old lady in a babushka.  Maybe it's because Nigel is just a sweet and rather comical dog.  Maybe it's also because I'm a dork.

Regardless, I think "A Fine Dog" captures Nigel more perfectly than any other title or description possibly could.  He really IS a fine dog, gosh darn it.

Nigel has his own special way.  If you know him, you know exactly what I mean.  For those of you who haven't had the pleasure, I'll try my best to convey what makes this older gentleman of a dog so special.  So darn fine. 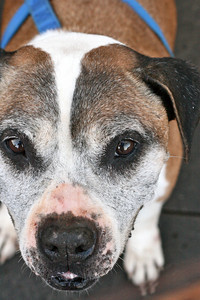 It begins with the fact that Nigel has a plan.  An itinerary, if you will.  He wrote it down somewhere with his gold fountain pen but you'll probably never get to read it.  Nigel would like to sniff some very particular blades of grass.  He would love you to come with him, and will patiently wait for you to figure out that you've foolishly been headed toward the wrong swath of nature.

Nigel also would really prefer to be in the company of others.  He'd join a cigar club if they allowed canines.  Since they don't, he requests that you spend some time with him, please.  He doesn't mind if you're a dog or a person.  He's fond of both.  He just doesn't want to spend his golden years as an old man island. 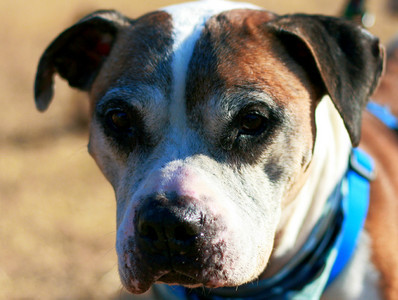 Yep, Nigel is old.  I'm not sure we know for a fact that he's 9...it's probably an estimate...but Nigel would be old even if he was two.  I don't attach any sad sentiment to that.  Nigel was just born a little bit cheeky, wise, and set in his ways.  The age thing is an obstacle for his adoption, as it always is with older dogs.  And, as always, it shouldn't be.  More than anything, it should be a selling point.

Nigel has a lot of selling points but he's too dignified to brag.  He's waiting for another old soul who wears soft slippers where he can rest his head.  Or old socks.  He's not picky.  But he would like to show you his very favorite bit of grass if you've got the time.

To meet Nigel, email [email protected] or visit our website to see where he is each day. 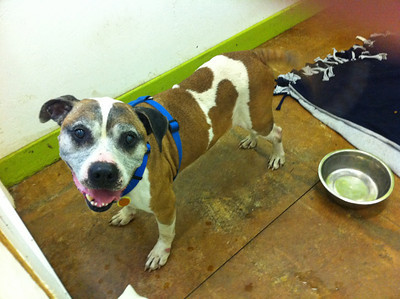