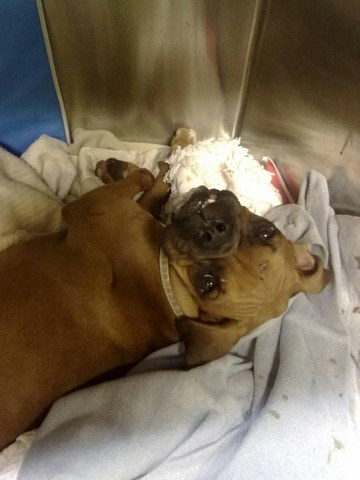 Update 10/15/10 8pm: We got this message from Dr. Jefferson about his surgery today:


He did pretty well and is recovering with one of the vet techs at at the vet clinic for the night.
I noticed on the blog we said he was 4 months old but he is really about 8-10 months....
He's a sweet boy who had a lot of trauma. We also drew off a bunch of air from around his lungs from a ruptured lung. He is doing well - we just need him to start eating and feel better.
We should know a lot in the next few days.

Paco is a 4 month old boxer in serious need of some help. He was hit by a car, survived, and then was owner surrendered due to his injuries.

He has a shattered front and back leg on one side and on the other side he limps and winces in pain as though there are some breaks or sprains in those legs as well. He has abrasions all over his body and cuts on his head. Despite his pain, he's got a sweet demeanor! He has been face kissing the counselors that have been holding him and medicating him.

Sadly this boy has not just physical pain but I am sure he is confused and heartbroken! Let's show him some APA! love. We will need to raise $1,000 for medication and bone surgery. We will be accepting donations using ChipIn. And let's wish Paco some good luck with his surgery! Since he can't use two legs we have to try to stabilize him with more than just splints.

In addition to donations, Paco is in search of a new forever home. If you think Paco could be the dog for you, email [email protected]
We're looking for someone who can open their homes and hearts to help Paco during his recovery and the rest of his life!