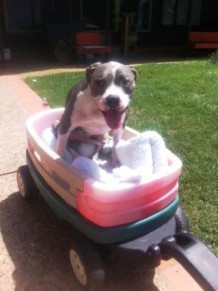 We're happy to report that Romo, the dog who was hit by a car which broke his pelvis, is doing very well!

We sent his xrays for a consult at the Heart of Texas Veterinary Specialty Center to see Dr. Vasanjee, an expert in these types of injuries.

Dr. Vasanjee advised us that he should heal just fine with conservative treatment, meaning we allow him to rest and heal on his own instead of going into surgery.  We loaded him up with painkillers and antibiotics for his wounds and now he is hard to keep down to rest! Thank you to his donors for making this happen!

Romo is being fostered by the good samaritan who found him hurt in the street. His foster says that he felt that Romo was looking and waiting for him and when their eyes met, Romo let him know that he was the person to save him.

The foster is thinking about adopting Romo. He recently met Shorty whose message about not judging a dog by his outer appearance really made an impact on him. Romo may have a tough-looking appearance, but he's been great with the other dogs, kids, and all people.