Using All Our Resources For The Babies

Every now & then, the Bottle Baby team has an opportunity to tap into the resources within the APA! foster community. We try to get our babies into foster care as soon as possible, but sometimes we know we have pregnant and new mother cats in our care as well. After all, kitten season means many pregnant cats end up at the shelter. When existing litters are small, and orphaned kitten ages are similar to those among existing litters, we will try to introduce them. Nothing is better for kittens than the milk a mother cat produces. Of course there are always risks of introducing illness to a mother & her litter and vice versa, but sometimes it is simply the best option for a good outcome. It also allows the volunteer bottle feeders to focus on the larger litters of orphaned kittens which cannot be placed and must be bottle fed around the clock.

Recently we rescued Diego, a one-week old singleton. Diego was cared for around the clock by our Bottle Baby team of volunteers and had been doing well, but he was all alone. A week later we rescued Finn & Flash, two-week old orphans. Two of our volunteer bottle feeders just happen to also be fostering mother cats who had recently given birth, so our resident vet and founder of APA!, Dr. Jefferson, thought we should see if the mothers would accept these bottle babies.

Liana, a silky 1 year old medium-hair tuxedo beauty, and her litter of 5 black & whites were introduced to Diego, an all-black male. He is a bit younger than Liana's litter, but it was worth a shot. Foster mom, Shorey, took Diego and gently placed him next to Liana. As baby kittens do, he cried. And that was all it took: Liana gently rolled over on her side & exposed her belly to him, and he immediately began to nurse. The other kittens, who are now weaning, cuddled in next to him to keep him warm. What a sight! He fits right in and is even the same color as the other kittens! He may be smaller, but he is definitely part of the family. Foster mom, Shorey, often sees Diego having one-on-one time with Liana. She is clearly allowing him an opportunity to get all the milk that he needs. 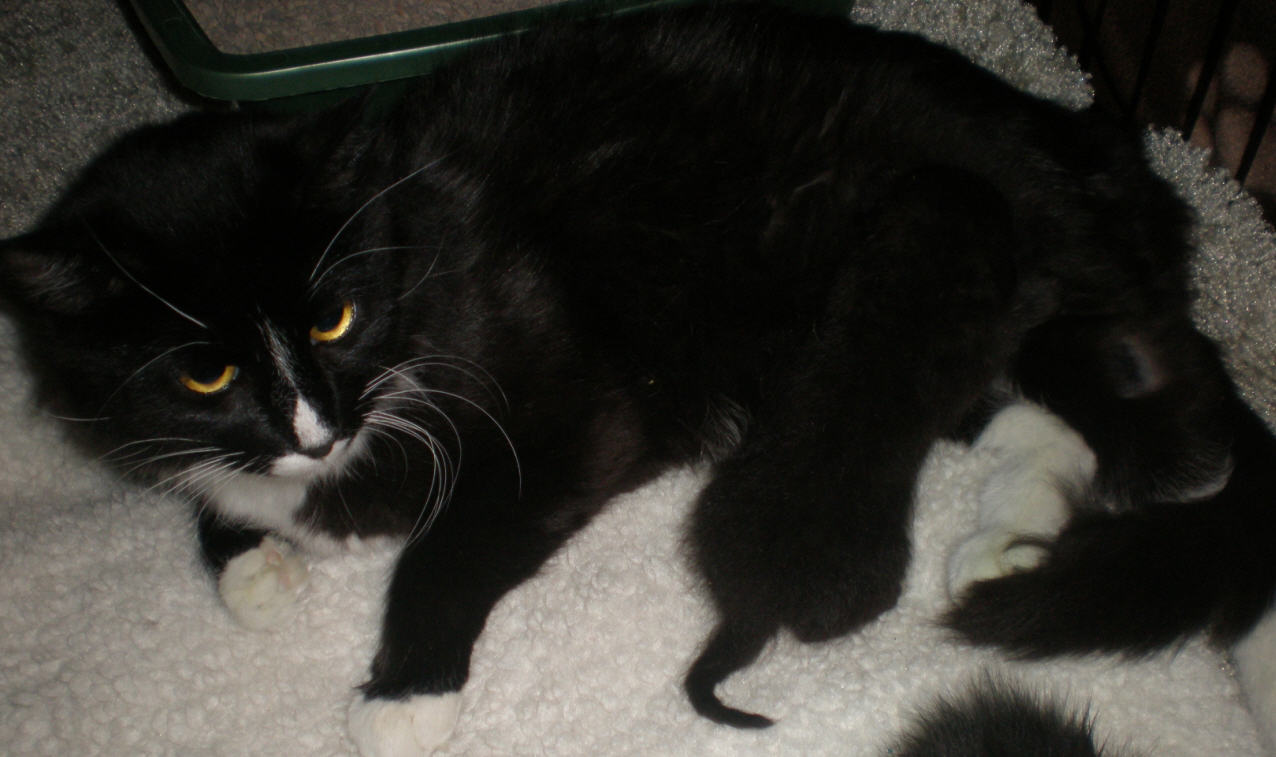 Another Bottle Baby team member and foster mom, Amanda, took Finn & Flash home to her foster cat, Barbie. Barbie is a rare orange tabby (usually orange tabby cats are male).  Her litter consisted of two kittens the same age as Finn & Flash, and Barbie accepted these new babies immediately. Barbie's integrated family is quite colorful! (Finn is the brown striped tabby and Flash is white). Amanda reports that Barbie has not left their side since they joined her family. What a good momma! 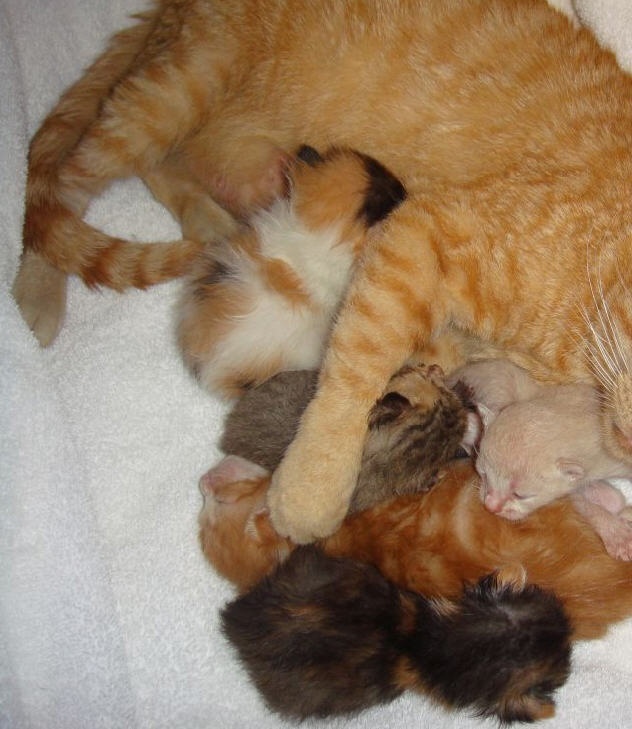 All babies in the care of APA!, whether they are orphaned & bottle fed or not, are weighed daily to monitor their growth and progress. Both new families encountered some initial weight loss, as the babies found their place in the pecking order of the nursing protocol. All are doing well now.

Healthy babies in our care are spayed/neutered when they are 8 weeks old and weigh 2lbs. At that point, they are ready for adoption! Visit the cat listings daily to see when these beautiful babies will be available for adoption.

If you are interested in fostering cats, kittens, and pregnant mothers, fill out the Foster Application on the APA! website.