Vivienne and her kittens 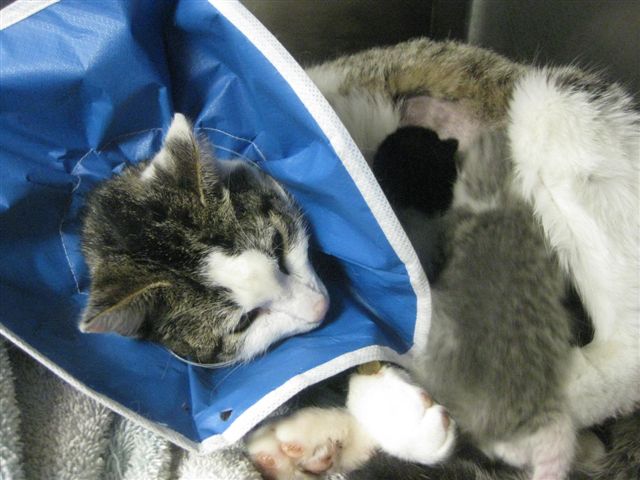 If you want a poster child for drawing attention to APA's mission, the cat brought to TLAC Sunday early from the emergency clinic, who had an infected, prolapsed uterus after giving birth to two kittens (who she was nursing) is a great story.

She was brought to TLAC and APA got the call at 2 pm that the little family needed out of TLAC asap.  It turns out she had an emergency spay surgery at the emergency clinic, and then was brought to TLAC.  In her e-collar, with her two newborn kittens, she not only was nursing them with big injured dogs three feet away, but she did a ragged, and then a very strong purr when I met her.  She purred continuously, let her kittens climb all over her while nursing (she just had life-saving spay surgery) ... what a trooper. 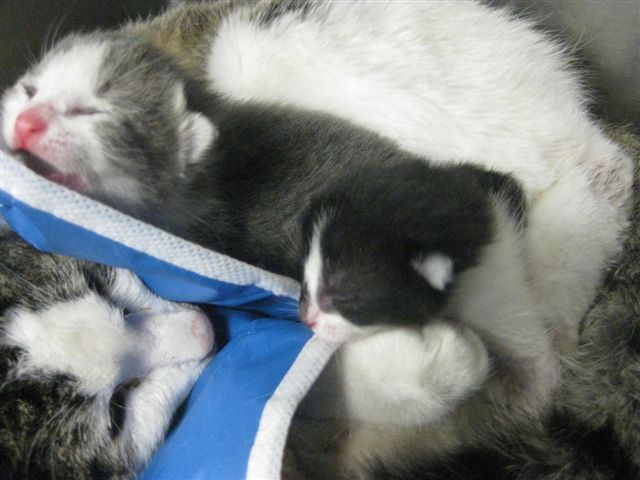 Their foster mom picked up all three (now named Vivienne with babies Vima and Vader) and a few days later she informed us that "Vivienne is doing great. She's in my bathroom with her two babies and has actually taken on three more kids as a surrogate. She's a great mom and is healing well from her surgery."

Since then Vivienne has become a surrogate mom to another orphaned newborn kitten (that means she has six kittens now!) and now they are one big happy family.

It will still be a few more weeks before the kittens are big enough to be adopted but in the meantime you can see how the kitties are doing in these short videos.

With the new additions:
httpv://www.youtube.com/watch?v=ibC_96XmRsg

We need more funds if we are going to keep saving the injured and the medical emergencies like Viv and her babies. At APA! we want to save every possible animal who comes through Town Lake's doors. We're known to take the sick pets like Vivienne, injured cats like Quentin, and the scared cats like my foster, Ebony, was before she came to my home. At the shelter these cats are thought to be unadoptable. With the care of foster parents and vets, and donations from the community we can give these pets a second chance.