In my relatively short time volunteering at APA!, I’ve experienced the full gamut of emotions – from the highest highs when a pup I love gets adopted to the super low feeling I have on the occasion that a pup gets returned. This is especially hard when it’s one of our longer stay dogs.

People return dogs for a variety of reasons. Sometimes, the dog doesn’t get along with another dog in the house. Sometimes people just don’t feel prepared to take care of an animal full time. All the reasons break my heart, but one of the saddest for me is when a dog is returned for exhibiting separation anxiety. No aggression, no disagreements with dogs or kids. Just an intense fear of being left alone. I think it breaks my heart for a variety of reasons – one being that this affects a few of the sweetest dogs I know. A bigger part, though, is that this is an issue that can be remedied with training, time, and patience.

In a perfect world, every adopter of a shelter dog would wait several weeks before leaving the dog home alone. During this time, the dog builds trust and confidence in the humans and comfort in the home. I know that’s unreasonable for most people, but an adjustment period is always a positive thing. If you’re a 9 to 5’er like so many of us, adopting on a Friday and giving the dog a few days to acclimate to your home is a good idea. 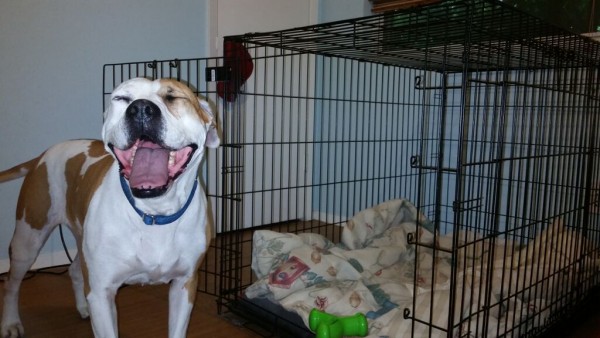 Whatever your work situation, slowly warming your pup up to the crate can help with separation anxiety. The big principles here are to:

That’s just the CliffsNotes version, but there are some great resources about counterconditioning for separation anxiety online, and APA! has an amazing resource in their behavior team, who are always willing to help you create a happy home with your adopted pup.

I have such a heart for these fearful pups, and some of the best dogs I know have been returned because they exhibited separation anxiety. If you ever adopt a dog with separation anxiety – or if you just want to keep them crated when you’re out of the house, I hope you’ll make crate introduction a very positive and stress-free activity for all involved! It can actually be a very positive and fun bonding experience if done with patience and love.