At first Mags comes off like Danny Zuko from the movie "Grease." He’s too cool for school, hunky and handsome. He’s a loner, a rebel… until a cute young female comes along to warm his heart.

Mags met Peanut, a female tortie, when they shared a foster home. Suddenly Mags, the older and bigger boy cat who was very discerning when it came to other cats, decided he actually did like another cat. Soon Mags was sharing his treats and soft food, grooming Peanut and watching contentedly as she played. Now Peanut has a likely adopter. Mags will soon be alone, trying to look tough and aloof.  Don’t let the act fool you. 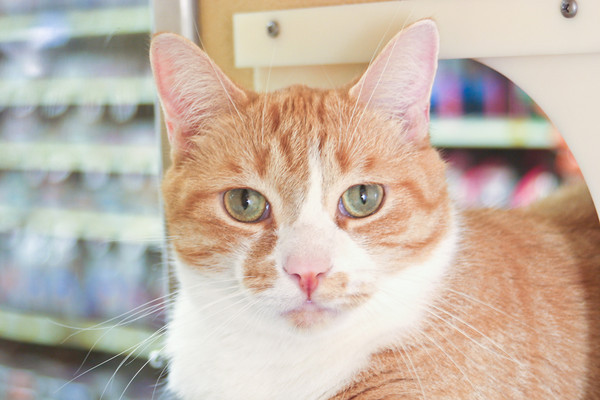 Mags is nicknamed "Squeaky" for his sweet, falsetto singing voice. At a healthy and hearty twelve pounds, Mags looks like he should have a deeper meow.  His squeaky meow is disarmingly charming.

Mags doesn’t like to be held unless it’s for the purpose of a better view out the window. He is an independent, mellow observer. Mags will occasionally chase a toy, but he’s not going to let himself look too silly. He’s got a reputation to maintain!

Mags would do well in a home without young children, since he’s not overly cuddly or playful. Mags is front-declawed, neutered, vaccinated and litterbox-trained. He has turf issues with dogs and with most other cats, just like Danny Zuko and the T-Birds had with kids from other schools. But, Mags might well grow to love a younger, female cat-companion, just like he grew to love Peanut. His age is estimated at three to four years old.

Mags eats special food due to a suspected allergy, which means no wheat, corn or soy. Currently, he gets Evolve brand food, which can be found inexpensively at most area H.E.B. stores.

Mags currently resides at the Bee Cave PetSmart in the APA cattery. When visiting him, rub a bit of catnip on your hands, and be prepared to spend some time while he warms up to a new friend. Even in the movie Grease, it took Danny Zuko a while to let his guard down, and profess his love for Sandy.

Learn more about how to adopt a cat from Austin Pets Alive!

Thanks to APA Volunteers, Jennifer Currie for writing about Mags, and Olivia Thompson for his photographs.