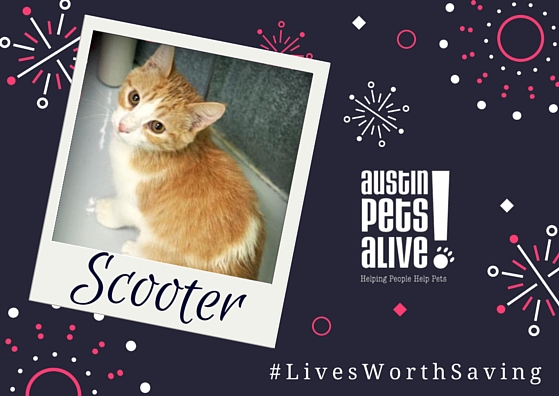 Scooter has ringworm. Ringworm is a treatable fungus infection similar to athlete’s foot, but in many traditional shelters, kittens with ringworm are immediately killed because it is contagious to both animals and people. Fortunately for Scooter, he was sent to Austin Pets Alive!’s lifesaving ringworm treatment ward.

Last week, Scooter became the 200th ringworm kitten to be adopted from APA! in 2015. That’s 200 lives saved by our staff and fungus-fighting volunteers, who care for these kittens until they are clear of the infection. It takes time and lime dips, but the effort is worth it because these are lives worth saving.

APA! depends upon donations to run lifesaving programs like the ringworm ward.

Will you support more kittens like Scooter by making a contribution today?

On behalf of 200 kittens and their families, we thank you.